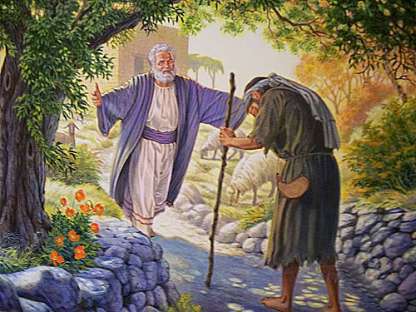 I awoke early this morning. This is very unusual for me; I only find it hard to get to sleep on rare occasions, but once I do, I usually need to be awoken. It’s one of the duties my wife performs diligently, believe me!

One of the things that awakens you unexpectedly is pain. This time it’s not the pain from my wounds received on the operating table, but it is pain in my chest, since that is where the heart lies.

In my book, I used a wonderful thought from a devotional that said we should change the name of one of the best known parables. It is called the parable of the lost son in the NIV and other translations, but we have known it as The Prodigal Son for a very long time. I used to think that ‘prodigal’ meant lost, many have thought it to mean sinful, but it simply means wasteful, reckless or lavish. The devotional I read suggested we call it The Prodigal Father since it was the father who was reckless in giving his wayward son his inheritance too early and lavish in treating him so well on his return. This new angle was a wonderful one, and the parable has so many angles; I even used the elder brother in an earlier blog.

I knew at the outset of my book that I would face trials, because the search for true contentment means that I must learn, and my Father in heaven seeks to teach me. I have faced a lot lately, and some I never foresaw; some unexpected, like awaking in hospital facing death after a brain haemorrhage, some physical, like my recent operation and recovery, some nightmares, like the awaking again in intensive care and the flashbacks and paranoia I underwent (only briefly, praise God, but the memories remain). The last time I sought contentment, I asked God to stop teaching me, since I couldn’t take it any more. Now I’m stronger, but I’m at the point of asking him again.

Now this is a pain I cannot bear; it is worse than all that has gone before. Now I know, Lord, I understand! The Prodigal Father lost contact with his beloved son, and stood looking to the horizon every day for his return, never knowing. How long, Lord? How many years did it take for that return to happen? We are not told in the story, but I want to know, because my own daughter has gone, cut the ties, changed her number. A father-daughter relationship is special; I honestly don’t think a mother really ‘gets it’!

The parable is there to tell us about the pain that a loving father went through, so we’d know just how our heavenly Father weeps for his lost children who have gone their own way, and never pray to him. I feel it now, Lord, just as Hosea had to suffer an adulterous wife to grasp how you felt about your children going after other gods, I now know exactly what that Prodigal Father felt. I know what you feel. Please stop the pain now! This hurts too much, my emotions are in a total mess. I want the lessons to finish. Please.

But he said to me, ‘My grace is sufficient for you, for my power is made perfect in weakness.’ Therefore I will boast all the more gladly about my weaknesses, so that Christ’s power may rest on me. (2Cor. 12:9)

Grace be with you, readers.

UPDATE: Not too long after this prayer and plea, it was answered! As I read the text that told me the unimaginable, I literally danced on the spot. If you know me, you’ll know how ‘reckless’ that was for ME! I experienced the joy that the father felt. No wonder he ran, no wonder he fell on his son! I now know that there is a law that unruly children who bring shame to their family were to be stoned. The father defied that and FELL on him to protect him!

GemmaRuthBrown.com
The Ministry of JC